Big Change: what got you here won’t get you there

Big Change is transformational change often triggered by a disruptive event such as new leadership, new product launch, merger or acquisition, new market entry, and new outside investment such as private equity.

Big Change is driven by new vision and direction, affects every stakeholder, and comes with heightened expectations of a new level of performance and growth for the organization.

For leaders of mid-sized businesses, these are often once-in-a-lifetime opportunities that will either make or break them, their organizations, and their brands. There is no second chance.

Big Change is precisely the situation where it is imperative for a leader to have a strong communication strategy and flawless execution. Getting dozens, hundreds, or thousands of employees—across all functions of your business—to understand and take action on a new strategy is an enormous undertaking. Yet mid-sized organizations are just as likely to be broken by Big Change than to be “made” by it.

Instead of propelling the organization to a new level, most Big Change becomes a straight pathway to organizational swirl—simultaneous inefficient, counterproductive efforts from individuals and groups due to confusion, information gaps, misalignment, and unclear priorities.

Leadership exacerbates these feelings by leading with messages that are company-centric, focused on the “what” and “when.” But this is not heard because it’s overshadowed by the employee who is first listening for the answer to, “How does this affect me?”

Virtually every aspect and function of an organization is affected. The events that trigger Big Change set into motion a set of actions that behave much like a starburst. Once that burst occurs, all you can do is steer that energy and if you’re headed in the wrong direction, it’s pretty much impossible to stop it.

Channeled properly, this burst of energy can propel the organization forward very quickly. When that burst is not directed, much less harnessed, it leads to organizational swirl.

Step 1
Leadership spends months in preparation and planning, then are quick to unveil and communicate the strategy to their organization with the assumption that employees will embrace the plan in short order and enthusiastically take action. They expect progress against goals will be swift. But this is rarely the outcome.

Step 3
The chain of events has been set in motion. The organization heads into organizational swirl. Beset with stalled progress, costly missteps and lost opportunities, frustration arises at every level. The fingers begin to point between leadership and employees: “We already told them”, “What’s the problem with them?” and “Why aren’t they just doing X, Y or Z?”

Step 4
Frustrated, leadership reacts with additional waves of similar communications in the belief that more is the solution to the problem.

Step 5
The cycle painfully repeats itself. By then, it’s often too late.

Step 6
The business ends up missing its goals and joins the ranks of those who have contributed to these sobering statistics:

It’s not that mid-sized companies don’t make communications plans in preparation for and response to Big Change. Of course they do.

It’s just that they don’t always fully appreciate the magnitude of what is about to happen to them, their organization and brand, and the resulting communication needs.

Consider the recent Forbes study which reports that 70 percent of employees can’t identify their company’s strategy—even in normal times.

If the majority of employees can’t identify their company’s strategy during a normal time, what percentage would you expect understand it during a Big Change?

The best chance for success is to ensure all communications activities related to Big Change are governed by a meticulous and intentional communications strategy that has been simultaneously developed alongside the business strategy.

Root Cause #1: The strategy is incomplete
Communicating a Big Change strategy to an organization before it has been fully developed and articulated is the most frequent culprit leading to organizational swirl.

This occurs because leadership can usually “see” the full strategy as soon as the foundational elements are defined. Since they already know where the business is going, they don’t see the need to fully flesh it out in contextual detail. This ability to work with partial information and connect the dots on-the-fly is called business acumen, and it’s something all leaders should have. It’s why they are in leadership positions.

The problem is the employees who will carry out the strategy don’t have the same level of business acumen as leadership does. They can’t sift through partial information sets and connect the dots. And even if they do, there’s no guarantee they will connect them in the way leadership would want them to.

While the leadership team would be completely capable of executing the strategy from the back of an envelope, employees need and want leadership to spell it out. They want clarity and completeness. They need to understand not only the what and when of the strategy but also the why. They need the complete story.

Here’s an exercise you can try to see if your leadership team has the illusion of agreement.

Have each executive team member privately write the strategy on one side of a large note card. Read them and compare. Then select one employee and have each executive orally describe it to them in private. Finally, after each executive has had a turn, ask the employee to share what he/she heard. Note the discrepancies that appear even in this limited exercise. This exercise demonstrates how little margin for error there really is when communicating the organization’s new vision and strategy.

Root Cause #2: The illusion of agreement
When developing a Big Change strategy, leadership will spend hundreds of hours collecting and assessing information, exploring options, and discussing and debating the options and choices so they can reach consensus and make final decisions.

Ask each member of the leadership team to explain it and you’ll find troubling inconsistencies, not unlike the old parable of blind men describing an elephant differently based on where they are standing. No one is consciously in disagreement.

They are simply interpreting abstractions and nuances of the complex strategy through their own point of view. Leaders miss or ignore this fact because of their high levels of business acumen and their motivation to be in agreement with each other so they can begin implementing their plans.

Root Cause #3: Leaders out of sync with their audience
During the months of preparing and planning for Big Change, the leadership team has had time to not only process the intellectual components of the new strategy but also make the emotional journey needed to accept the implications and opportunities of the change itself.

However, unaware that they have completed this journey, the leadership team starts to communicate the Big Change strategy as though everyone in the organization has had a chance to go through the same process and can’t understand why employees don’t quickly understand and embrace it.

The problem is the employees aren’t the problem. It’s the expectations that are unrealistic as demonstrated by a model conceived by USC social psychologist Dr. Jerry Jellison, called the J-Curve. The J-Curve reflects the way change impacts an organization’s performance during times of change and the organization’s perception of it. 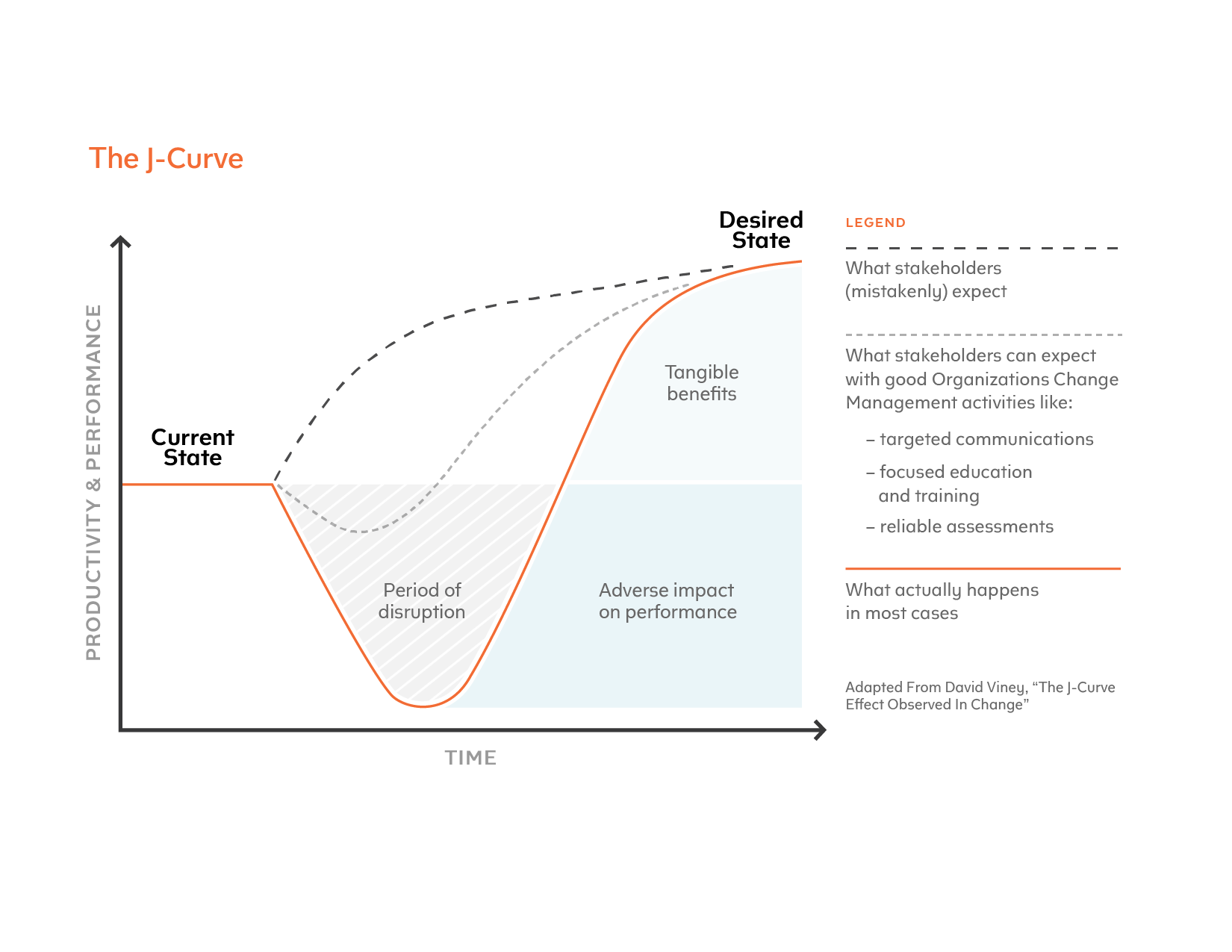 What this chart doesn’t tell you (but Jellison does in his book, Managing the Dynamics of Change) is that a) every stakeholder in the company will traverse the J-Curve at a different rate and b) those leading the change will be way ahead of everyone else.

Ensuring the unique needs of those stakeholders are met and that they make the J-Curve journey successfully is critical to the success of the Big Change plan. It’s the responsibility of leadership to communicate the strategy frequently, intentionally, and with consistency. Which brings us to the fourth reason Big Change goes bad.

Root Cause #4: Words and actions don’t match
Even if the messaging and its execution are flawless, if the actions of the company and leadership do not align with what they are saying, or they fail to stand behind its messages over time or across functional groups, employees will not believe. And if employees don’t believe, they won’t buy in.

That’s because communication is more than words. Communication is the transmission of the total sum of the words, decisions, actions, attitudes, beliefs, values, and character of the communicator. This includes the decisions leaders make and the priorities they set.

Business acumen (is) the ability to see the ‘big picture’ of an organization—and how the key drivers of the business relate to each other, work together to produce profitable growth, and relate to the job they do each day.

Leadership’s actions must match their words. Big Change is not the time for mixed signals. When employees witness a difference between what a leader says and what he/she does, they lose trust, become defensive and (consciously or subconsciously) stop believing and following that leader. If leadership’s words and actions aren’t aligned, the ability for that organization to execute the strategy is in jeopardy. Leadership and communication are intertwined.

Lead and communicate away from risk and toward reward
Communications planning should start as soon as leadership begins to contemplate a Big Change trigger event.

In fact, scenario-based communications planning should occur simultaneously with the Big Change planning process. Not only does this method make the strategy stronger, it prepares leadership for communicating to employees and will also reveal flaws in the team’s thinking as well as blind spots in the strategy for the Big Change itself.

What you do speaks so loudly
that I cannot hear what you say.

The simultaneous development of the business and communications strategies followed by a meticulously executed intentional communications plan ensures:

Hopefully this argument for the critical importance of simultaneous business and communications strategies and intentional communications during times of Big Change is convincing enough.

The question is, given all the potential pitfalls, can mid-sized leaders really afford not to? Because once Big Change is in motion their organization’s success or failure will hinge on whether or not they guessed right. Their organization and brand deserves more than a 50/50 chance at success. And we think they do, too.

For the latest insights into transforming B2B businesses and brands, sign-up to get notified of new articles and to receive the Avenue newsletter.